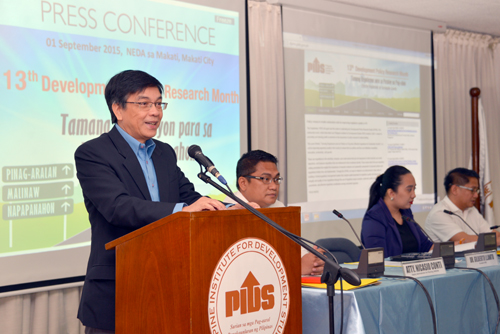 The Philippine Institute for Development Studies kicked off the month-long celebration of the Development Policy Research Month at a press conference on September 1, 2015. An annual national advocacy promoting evidence-based policy research, the DPRM focused its 13th year on the pressing theme of Effective Regulations for Sustainable Growth.

Dr. Gilberto Llanto, PIDS president, presented his study, Reducing Regulatory Burden, Improving Regulatory Quality. He was joined by representatives from regulatory bodies to share their experiences of trying to strike the balance between regulation and competition in their respective fields. The panel of speakers included Atty. Mary Ann Salada, public information officer of the Land Transportation Franchising and Regulatory Board (LTFRB); Atty. Nicasio Conti, deputy administrator for planning of the Maritime Industry Authority (MARINA); and Mr. Garry Domingo, head of the Quezon City Business Process and Licensing Office.

The speakers demonstrated the timeliness of the topic, presenting successes and difficulties in regulatory reform within their regulatory jurisdictions. Their presentations supported Llanto’s call for collaborative efforts to establish a more competitive and more coherent regulatory environment, and emphasized that a regulatory management system (RMS) is an essential strategic tool for sustainable and inclusive growth.

Regulations are designed to achieve a social or economic objective, usually on the premise of promoting and safeguarding public interest and welfare. In an environment where regulations are poorly designed or weakly implemented, regulatory burdens mount up. Business competitiveness is discouraged, services suffer, corruption festers, and public faith in governance drops. It is, therefore, important for policymakers and regulators to work together to create effective and quality regulation, and reduce regulatory burdens wherever they arise. In this case, establishing an RMS can help.

Llanto explained in his study how the Philippines can create a formal RMS. He referenced the Malaysian version and highlighted the existence of a central oversight body. The Malaysia Productivity Corporation conducts regulatory impact assessment (RIA) of proposed regulations to determine if they are effective, then releases a regulatory impact statement (RIS) for the public and stakeholders. Llanto admitted that the process may seem bureaucratic, but evidence shows that in the long term, proper planning and review produce a more effective regulatory environment.

He stressed in the open forum that a central oversight body is just one solution, and acknowledged success in opposite measures, like MARINA’s experience with decentralization. The emphasis, as Llanto pointed out, is on effectively systemizing the processes of designing regulation through the conduct of RIA and issuance of RIS, on strengthening implementation and enforcement, and on interagency coordination.

“One problem is the coordination among local governments when it comes to planning. There has to be consistency in the plans,” said Llanto. “It’s easy to blame LTFRB or MMDA, but we really have to look at the big picture—how we as a metropolitan unit really do the planning,” he added.

Atty. Salada enumerated several of the regulation policy updates of the LTFRB, including the LTFRB-Land Transportation Joint Administrative Order 2014-01 update on fines, the Modernization Policy’s update on the length of licenses, and the requirement to install GPS on bus franchise units. Another regulatory innovation is the new set of rules for transport network companies like Uber.

As Llanto later remarked in the open forum, the implementing aspect of regulations must go hand in hand with parallel infrastructure planning and capacity building. But as a regulatory agency, and being the most “felt” and visible area of public service, the LTFRB must improve its breadth of regulations.

Regulations in the maritime industry

Meanwhile, Atty. Conti relayed the benefits experienced by the industry when regulatory burdens were reduced and quality reforms were introduced. Before 2012, seafarers had to ply through plenty of steps to gain certification. The reform (Republic Act 10365) introduced thereafter by the Aquino Administration and the DOTC leadership not only streamlined all maritime regulations—regulations concerning manpower, ships, and shipbuilding—under one agency, but regulations were also aligned with international standards.

The remittance of seafarers amounts to the single biggest contribution of a block industry. With Republic Act 10365, Filipino seafarers have become more globally competitive, taking a 25-percent share of the world’s professional supply and becoming the top choice for industry employers.

Two other regulations that changed the industry are the Categorization of Navigation Areas policy and the Co-Loading Act. Instead of using the ages of vessels to determine safety, the Categorization policy strictly aligns vessel size for particular routes, ensuring that only vessels that can safely travel certain routes are able to do so. The Co-Loading Act, meanwhile, reduces the cost of shipment for foreign ships by allowing them multiple port calls.

Quezon City: A model for the ease of doing business reforms

Lastly, Mr. Domingo proudly recounted Quezon City’s success in revoking regulatory requirements in their effort to improve the ease of doing business. The city represented the country in the Ease of Doing Business International Conference, where the Philippines has been posting impressive leaps in performance ranking. From 138 out of 189 countries in 2013 to 95 this year. Quezon City did its part by reducing processing days from 34 days to 8 days, and by being the first local government unit (LGU) to participate in the Department of Trade and Industry’s Philippine Business Registry, which streamlines business application requirements.

He agreed that establishing an RMS will help. LGUs can only do so much if national laws are not changed, he said. Coordination in both planning and reforming regulation is key.

Overall, the timely theme of the DPRM emboldens the very objectives that underlie the DPRM’s annual celebration, that is, to highlight the importance of policy research in nation-building. “As researchers, we believe not in luck nor in fate,” uttered Dr. Llanto in his remarks, “But in hard work.” ###