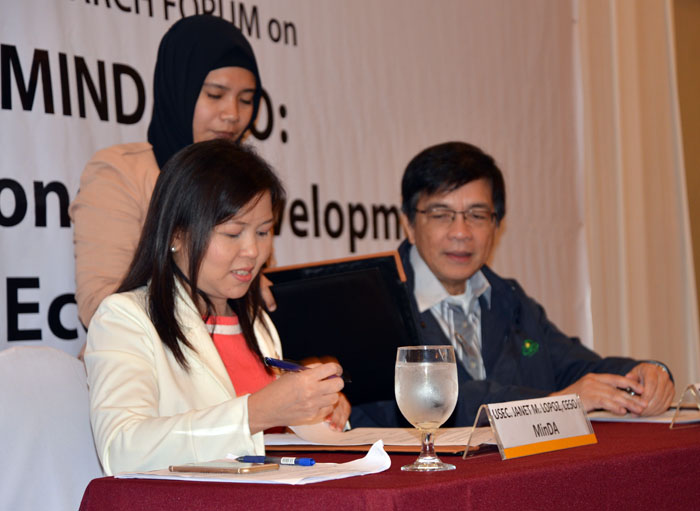 DAVAO CITY--State think tank Philippine Institute for Development Studies (PIDS) and Mindanao Development Authority (MinDA) reinforced partnership through the signing of a memorandum of understanding (MOU) during the 1st Mindanao Policy Research Forum on September 4, 2015, at the Waterfront Insular Hotel in Davao City. The forum, which centered on the theme “Advance Mindanao: Toward Sustainable Economic Development and Balanced Ecosystems”, brought together more than 100 participants from the government, academe, business, and civil society sectors, including the media, in Mindanao to underscore the potentials of policy research in pursuing development goals.

In her keynote message, Undersecretary Janet Lopoz, executive director of MinDA, said that the inaugural forum formalizes their partnership with PIDS. “[The partnership] is significant in bridging the gap in our policy research—or the gap that persists between the creation of information and their application to policymaking,” she added.

Based on the MOU, the partnership aims to promote policy research and knowledge sharing in support of Mindanao’s development needs, facilitate access to policy studies and materials produced by higher education institutions in Mindanao, and establish the Mindanao Knowledge Center (MKC) with the assistance of the Socioeconomic Research Portal for the Philippines (SERP-P) team of PIDS.

PIDS President Gilberto Llanto agreed that interagency cooperation, such as the PIDS and MinDA partnership, emphasizes the importance of producing evidence-based policy. Llanto, in his opening remarks, shared a particular message of the forum that “life becomes meaningful only if you live it for something out there.” He elaborated that contributing to the betterment of society—through relevant research, policies, and regulations—is one way to make life meaningful.

“We have to take a look at government policies, examine them, and be critical about them. We need to find ways to improve those policies, and present these to decisionmakers. But you can’t do that unless you have evidence. In this country, we have seen policies come and go. Policies work and sometimes do not work. What we need is to gather evidence to show that a particular policy really works for the common good, for the betterment of others,” Llanto explained.

In 2014, Mindanao contributed 14.4 percent to the national economy. The increase in its gross domestic product (GDP) in the same year was 7.4 percent—higher than the total GDP growth of the Philippines (6.9 %). Lopoz stressed that also in 2014, for the first time, surveyors came to Mindanao and found out that it has been contributing and pulling up the national average in terms of economic development.

Local and international trade in Mindanao has also showed significant improvements. Products from the region have now penetrated large markets aside from the usual export destinations, such as the United States and Japan. Lopoz reported that Mindanao is now exporting to countries in Africa and to Switzerland, Russia, South Korea, and Australia. “Mindanao is poised to be a major player in the world market,” she remarked.

With the outpouring of initiatives for Mindanao’s development, the challenge of sustaining the growth lurks in the background. Lopoz cited making growth inclusive as a major challenge to Mindanao. She mentioned that Mindanao should improve its competiveness to take advantage of the gains of the coming ASEAN Economic Community this 2015.

Lopoz also engaged both the public and private sectors, as stakeholders of development, to take part in sustaining the growth in the region by balancing development goals and ecological integrity. She underscored the concept of sustainability as an approach to address the increasing population of Mindanao in light of climate change and food insecurity.

During the mid-day press conference for the 13th Development Policy Research Month, regulatory burdens were mentioned as major roadblocks in sustaining the growth in Mindanao. According to Mr. Vicente Lao, president of the Mindanao Business Council, a number of national polices tend to be biased against Mindanao. He cited the recently amended Cabotage Law, which used to have negative impacts on the trading industry in the region. Atty. Anwar Malang of the Department of Interior and Local Government-Autonomous Region of Muslim Mindanao seconded Lao and suggested that regulatory policies that affect Mindanao should be reviewed and reformed. He added that the intergovernmental relation between the national and local government remains complicated.

In terms of research gaps, Mindanao needs more studies on Islamic banking, halal industry, peace process, and social entrepreneurship. Llanto said that the people who should conduct the studies on these matters should be researchers from Mindanao.

To address these issues and challenges, Lopoz said that Mindanawons need to identify the enablers of growth and invest on them. In her presentation, she stressed the importance of looking at the six I’s of development in order to sustain growth: (1) infrastructure, (2) industry development, (3) investments, (4) innovation, (5) institutions, and (6) integrity.

Lopoz referred to infrastructure as a major constraint to Mindanao’s development. She cited a PIDS study that revealed that a third of the cost of agricultural production is caused by poor and limited infrastructure services.  As a response, MinDA is developing the Mindanao Development Corridors, a development initiative that aims to provide the region with common service facilities. However, Mindanao’s low absorptive capacity is a major roadblock to creating relevant infrastructures in the region.

Industry development gets a boost from the growing tourism in Mindanao, in which progress in the Bangsamoro peace talks actively plays a significant role. According to Lopoz, Mindanao’s share to tourism investment now surpasses all others in the country. The region used to have no foreign direct investments (FDIs), but because of increased business development, FDIs have increased significantly, she said.

In terms of innovation, particularly in research, initiatives are mounting, but these are not maximized. Lopoz noted that innovations should fuel development through actual studies and resources. Mindanao has mechanisms for lobbying and advocacy to promote relevant policies and to use research in actual policymaking. However, actual research and resources are still warranted. Lopoz, thus, called for a strengthened partnership between PIDS, through the SERP-P, and MinDA’s MKC.

Institutions in Mindanao also need reinforcement. Lopoz underscored the need to align provincial offices and policies to the region’s strategic approach. Thus, institutions have to be in sync with one another in terms of governance style, policies, and research.

To glue these together, Lopoz said that integrity, especially in managing ecosystems, is necessary. This refers to the ongoing massive coordination between offices across provinces—an initiative she called One Mindanao. “We share the same rivers; we share the same ecology. Before, we were always conscious about political divisions and boundaries. Now we are so much better because we have coordination across offices in all sectors—government and private—who are cooperating to ensure that all our ecological policies are applied in every province,” expounded Lopoz.

During the press conference, Lopoz said that the inaugural Mindanao Policy Research Forum and the signing of the MOU is a celebration of the development partnership between PIDS and MinDA. When asked by media representatives on what people can expect in the future from this collaboration, Lopoz answered, “We’ve been using a lot of PIDS materials as references in our research and policy work. This time [through this partnership], we hope to do policy research together as well as capacity-building activities and more policy forums for the betterment of Mindanao.”

Likewise, Llanto sees MinDA as an excellent partner in promoting evidence-based policymaking at the local level and in advancing policy studies forward.